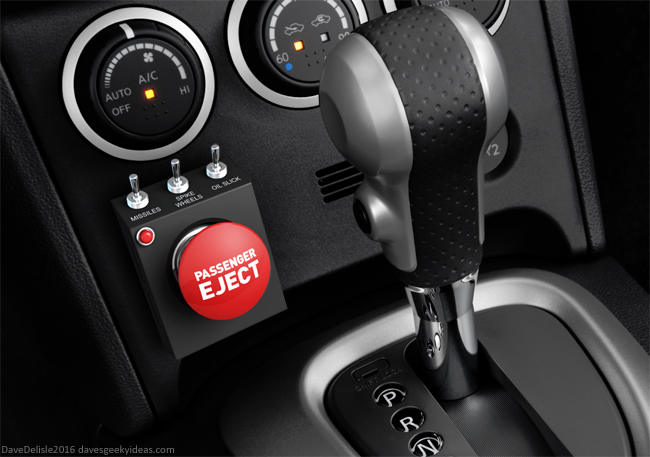 Here is a device design that is in the same vein as the Flux Capacitor USB Car Charger, but for fans of James Bond. A passenger eject button and toggle switches for weapons, what more does a car need? This is an expansion of the cigarette lighter cover I posted a few years ago.

It features an indicator light when a USB device is plugged-in. It could potentially flash when the car is parked as a security alarm light, not sure if that is possible (maybe it has its own battery that comes on when car battery power is off). The toggle switches flick back and forth, but are just for show. The passenger eject button pushes in just as a lighter would (lighter function may not be feasible). 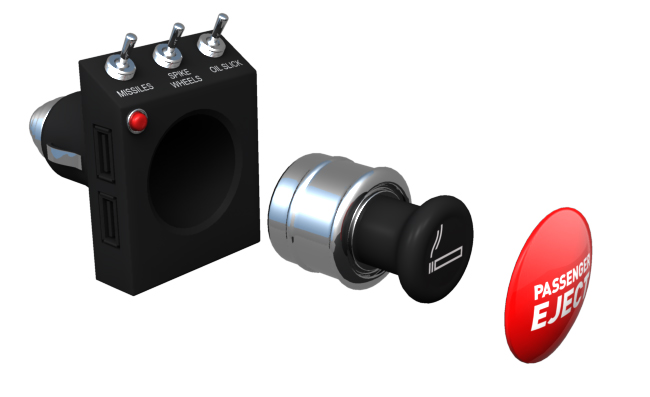 Unlike all those other USB car chargers out there, I decided to retain the original lighter from the car. The red button just clips over top. No need to discard the lighter or store it in the glove box. This also makes for a handy pass-through if you need to plug in something that requires the car lighter socket.

This would go perfectly with that Spy Hunter car stereo design, also from a few years back.

UPDATE: whoops, I did not know cigarette lighters are no longer standard in cars, just their power sockets are. I still want a pass-through feature, so the Passenger Eject button can be attached to its own ‘plug’, or can be a cover that flips open like so: