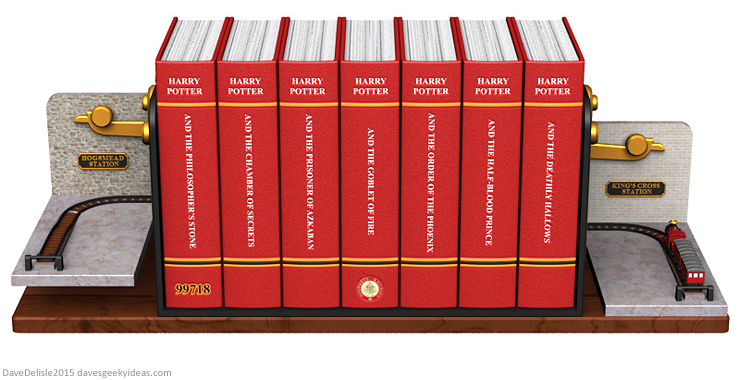 Please forgive the bare-bones look of this design (more on that later), I just wanted to express an idea for a living/mechanical book display, one that operates without using electrical power. There’s a fair bit going on here so I didn’t want to clutter it up. See it in action after the jump.

I present a weighted scale system that operates entirely by removing (or returning) a single book. Once you grab a book off the shelf, the flanking platforms adjust in height, causing the miniature Hogwarts Express train to travel towards whichever platform is lower.

When you start reading a Harry Potter book, you’re essentially transporting yourself to Hogwarts, so this book display literally mimics that journey, as the train traverses between King’s Crossing station and Hogsmead station (and back, when you return the book).

Another feature is the train playing the first 8 notes of the Harry Potter theme song by hitting some bells or chimes during its voyage. Unfortunately the song will play backwards when the train returns home!

However that’s only if the track runs in a “U” configuration, as depicted here. The train track can also run in a full oval around the stand as well, but I chose this layout so the books can be unobstructed and easy to grab.

On both platforms the train runs up a small incline, to help give it some initial momentum when it starts moving again. The train is held in place by a spring-loaded flap that the train can roll over in one direction. The flap is connected to the bottom of the display, so once the platform elevates the train can move freely.

About the design: I went for a sparse look to show how this works. For a real book display both platforms would have miniature train stations, a bunch of people milling about, and perhaps some background dioramas showing the locations of both Hogwarts and London. I did make the book spines in the style of the train itself, my lone attempt at being fancy here.

I might be onto something with the concept of living book displays. For the Hobbit, a bunch of barrels could roll about. All of the combatants from Hunger Games could rise out of the ground into the waiting arena. A lot of ideas to think about.

I started this a few years back as a potential Blu-Ray case design for a Harry Potter collection. My enthusiasm for designing Blu-Ray cases has waned, mostly because I stopped buying physical movies some time ago. Designs based on books and video games is something I look to do more of in the near future, so stay tuned for that.