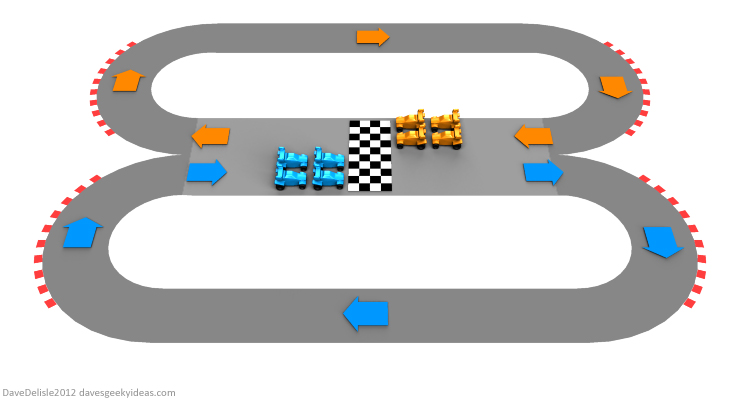 The last post which featured Mario Karters running amok all over the track got me thinking: wouldn’t it be cool if you could combat other racers head-on for brief stretches?

How it works: The racers are split into 2 groups. They race on two tracks (that are mirror opposites) which are conjoined in small stretches (“Chaos Zones”, in light gray in above image), allowing racers to combat each other head-on. The start/finish line is placed on a conjoined section.

Despite being split up into two groups, you’re still competing against the same number of opponents to place at the same finish line. Not only are you racing neck-and-neck while hurtling towards the finish line, but you might see an opponent making a charge for 1st directly towards you from the other group.

There’s a lot of fun wrinkles you can add. Here is one where both tracks converge on the conjoined finish line by ramp. So now you have to deal with “raining” opponents:

Track configurations can have multiple conjoined areas. There would be gates and signage to always alert racers to which track they should be on when leaving a chaos zone. Even the roads could be color-coordinated to ensure you don’t drive backwards in the other group’s track.

Other stuff to add to the Chaos sections:

– “See-Saw” ramps (teeter-totter ramps), where you after you jump the ramp, it then plops down for someone in the opposite direction to use.

– “Blind” gates. Imagine a line of several closed doors blocking the track, you have no choice but to drive through this. The problem is you can’t see if anyone is coming from the opposite direction heading for the same door as you. You’d hold your breath when approaching a blind gate, hoping not to crash!

– You could probably earn a speed boost by playing “chicken” with oncoming opponents in chaos sections. Much like the boost you’d get from narrowly missing traffic in the Burnout series.

– For a Mario Kart game, a new “Ghost” power-up would be beneficial, making you a temporary apparition for driving through Chaos zones unscathed.

– “Pinball” accessories which would occupy the area, making it a minefield for racers. So an opponent could push you into a flipper or bumper to mess with you. Having just a bunch of obstacles in general would help make this area really close quarters for all the racers.

Because of the split track, you can have team competition. At the very least, you’d have one teammate in the other group. You’d be trying to help each other win whenever possible. See someone tailing your teammate? You could try to cut them off or fire a weapon at them in the Chaos Zone. Stuff like that.

I’ve never seen a racing video game attempt this, so feel free to correct me if this is old hat. I’ve seen Hot Wheels toys with intersecting tracks, but that’s about it. Maybe this is frowned upon by the ESRB or something – we can’t be teaching kids to veer into oncoming traffic! The explanation I can think of for why this isn’t in a racer.