I designed this BTTF alarm clock based on the Time Coordinates display from the Delorean. It automatically changes the alarm date to tomorrow on a daily basis, unless you want to push it forward a few days because of the weekend. 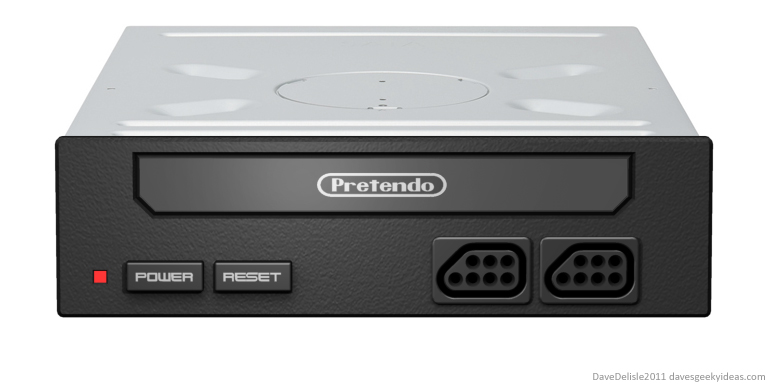 I know emulation makes this device unnecessary, but sometimes you want to play with genuine controllers and a real cartridge. I feel clone consoles that slot into a desktop PC like an optical DVD-R drive would be coveted by a few gamers out there.

Most PC towers have several drive slots in the front, may as well populate them with clone consoles! Cartridge-based clone consoles would look similar to the above example. Disc-based systems would have a DVD tray and compatible control ports. I don’t think memory card slots (GameCube, PS2) are needed.

There is the Retrode device, which has cartridge slots for the SNES and Genesis, and plugs into the PC via USB. It’s a great device and is portable, but I would prefer something that is integrated, given the choice.

Really straightforward design: a blu-ray case based on Dexter’s blood slides box, where the discs are the drops of blood and the clear jewel cases are the slides. This would be about the size of a shoebox.

Also in the fall of 2013 Showcase released their own box set that had a similar approach: 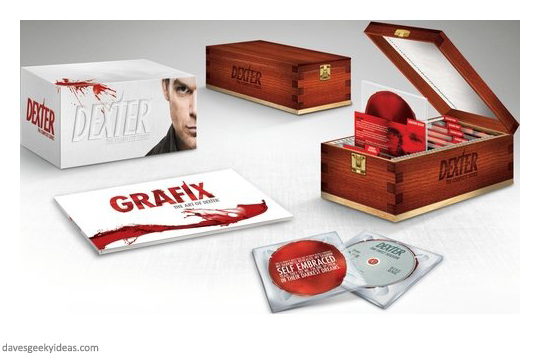 I think it looks really good, despite the smaller cases. Might look even better without the red liners in each case. Had my enthusiasm for the show not plummeted in the later seasons I would’ve bought this for sure.

Wireless charging pads emerged onto the scene a few years ago, and they are a brilliant innovation. Merely place your compatible gadget on top the pad/mat, and it will recharge through osmosis (actually with electro-magnetic induction to be precise). No wires needed, except for the one used to plug the mat in of course.

The simple interface of these recharging mats reminded me of the famous Star Trek villains the Borg and their ‘recharging stations’. So making a borg-themed charger for your portable device seems like a sensible idea if you really think about it.

The Ghostbusters’ PKE Meter would make for a very cool wireless router. The two “ears” would double as antennae, and the array of LED lights would display the current signal strength. Plus the screen would display helpful network information. The handle would need to be weighted down to ensure this stays upright.

Several months ago I designed a ‘Star Trek Viewscreen‘ gadget that would accommodate any LCD monitor or TV. Then I recently thought this feature could be directly embedded into the LCD monitor itself. And voila.

END_OF_DOCUMENT_TOKEN_TO_BE_REPLACED

This concept marries the modern touchscreen with the old iPod clickwheel. It would be the best of both of worlds, at least for those of us who like to skip songs without looking.

The OREO shape would make for a neat way to store earbuds too, almost like a yo-yo. Who doesn’t wrap their earbuds around their iPod?

This would be small enough to clip onto a wristband or a lapel.