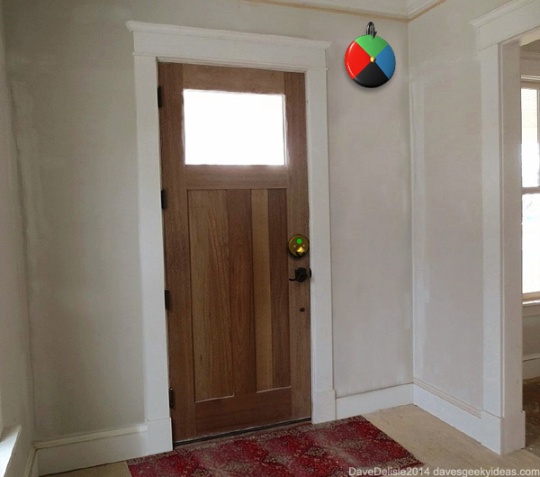 Here are some ideas that would bring some personality to your home’s front door: a deadbolt and doorbell fashioned after the ones seen on the “magic teleportation door” from Howl’s Moving Castle. Now you can exit the house in style!

To make both of these items feasible for the real world there are some compromises: the doorbell would be static, because the rotational movement would be too hard to implement; and the deadbolt would only feature two colors instead of four, with red and green being used to show the door as locked and unlocked respectively.

Because the handle on the deadbolt is square-shaped, it would be hard to tell if the door is locked at a glance. Limiting the display to two colors to show locked/unlocked is ideal for this setup.

All that’s left is making sure the doorbell has that familiar chime heard in the film. To me it sounds more like a typewriter bell than your typical doorbell.

NOTES: I’m sure people much smarter than me could rig a 4-color deadbolt with a doorbell that can rotate (to match the deadbolt), but for everyday use and long-term durability the above setup would be more viable in my opinion.

Like just about everything else I post here these don’t exist, so your only option is the DIY route. The doorbell is easy, just a matter of painting an old bell and adding a pointer (installation might be a headache). As for the deadbolt there are similar items on the market but there are no indicators for the handle side of the door. As of this writing I could not find a custom deadbolt maker.