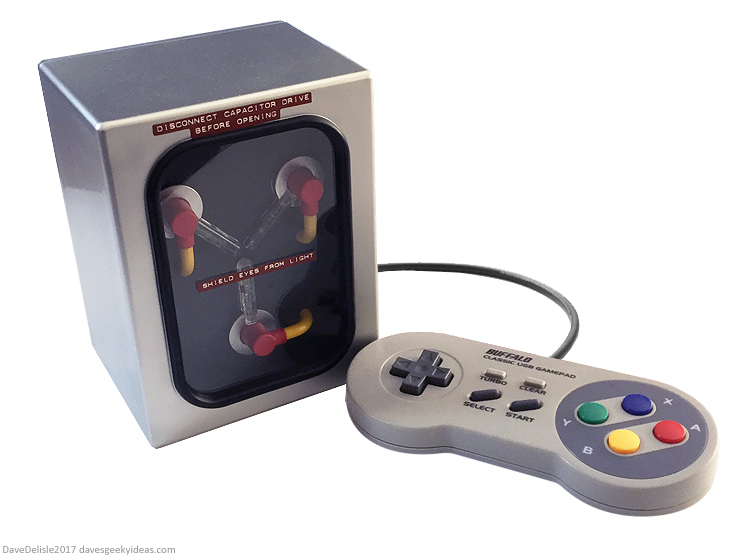 I’ve been thinking about building my own Raspberry Pi console with RetroPie for the past several months, and I finally did it! Getting RetroPie to run took a lot longer than building this console, which was relatively easy. But there is a downside, more on that later.

First off here’s what I bought for the project:

The main housing is the Flux Capacitor from the BTTF Yahtzee edition. At 5.5 inches tall, 4 inches wide, and 3 inches deep, it was more than big enough for what I needed. The back third is hollow, and is covered by a removable flap to access its batteries and switch. I think this hollow space was for rolling Yahtzee dice though? No idea.

I’m new to Raspberry Pi so I opted for the Zero W, which was more than adequate for the old games I’ll be playing. The kit came with an 8GB SD card (with Raspbian OS), power supply, USB/HDMI adapters, and its own case. An SD Card Reader, powered USB Hub (in the end, optional), and USB game controllers round out the list of supplies.

Oh yes, Velcro. I did not want to permanently glue anything down in case I needed to change something, or needed to access the Flux’s battery cover. Velcro strips are very handy, and I used them to affix the Pi to the main case, and the USB hub to the inside of the back flap.

Had to drill a 1 inch hole for the power supply, controller, and HDMI cables to snake through the back flap. Once I got everything up and running I disconnected the USB hub because I only had one controller going directly to the Pi, however the Hub is still inside the case if I ever need it.

One tip: if you attempt this, put something soft underneath the Flux when you lay it flat on its face, I scratched a bit of black paint off the front casing. Easily repairable though.

Here is the bad part: the Flux Capacitor is pretty cool-looking and has a premium replica vibe going for it, unfortunately it only lights up briefly when you give it a shake. It would pulse maybe 3 or 4 times when shook, then go dark. Here I am scrambling to take a picture of it with the lights on, and yes that’s my thumb on the top left.

I’m okay with the brief light feature in the end, because the pulsing lights are bright and would be annoying if they were on continuously. Wish I could mod them so they’d play during the Pi’s powerup sequence, or maybe when I am browsing RetroPie’s main menu. I’d also like to mod it to run on USB power instead of AAA batteries.

Overall I’m pretty happy with it, this thing literally helps me go back in time to play old video games, and looks good on the desk or wherever I park it. Plus it’s nice to finally own a Flux Capacitor in some form, if you’ve followed this blog you’ll know what a big BTTF fan I am.