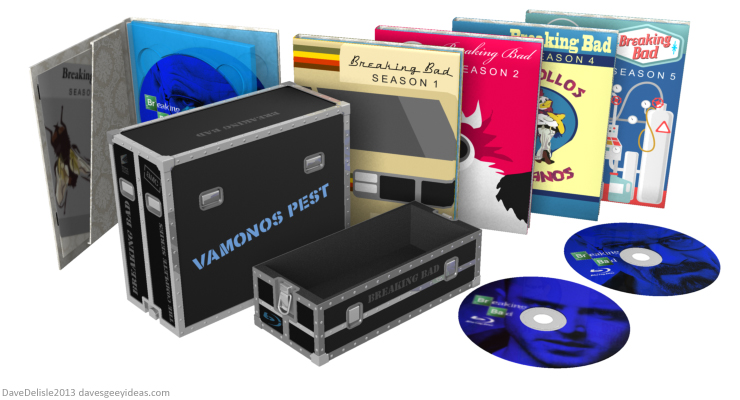 The easiest cases for me to design are based on actual cases. So when I saw that ‘Vamonos Pest’ stage case roll by a few episodes ago, I knew it would be perfect for a collection.

The dimensions of the real-life stage case are quite ideal for a box set. This design is a bit wider to help contain all five sets. I believe it would fit amongst your Blu-Ray library seamlessly, if the individual cases were a bit shorter than normal Blu-Ray cases.

There are only 2 working latches on the sides to open and lock the case. The rest of the small latches are for show. This creates only two halves of the case, instead of the actual 3 or 4 sections the real stage case uses.

Every season case is loaded with imagery from its respective season. As much as I like uniform sets, it was fun to play with the imagery the show has imparted during its memorable run.

A completely optional feature are stowaway wheels beneath the case. The wheels make the case authentic to the show, but aren’t necessary in my opinion:

We won’t see a Breaking Bad Complete Series release until Winter 2013. The fifth and final season just started, and won’t finish airing until next summer (season 5 is comprised of two 8-episode halves). This design is very early, but looking back I can’t think of a better candidate than this stage case. Yes a case based on the RV might be cool, though somewhat over-the-top. I’m often told my vehicle-based cases are too astronomically expensive to manufacture.

UPDATE: Here is the cover art. I went a little overboard for season 5, as it goes with the case somewhat.

*As far as I know Criterion doesn’t release TV shows. But if they did, Breaking Bad would be eligible (along with contemporaries The Wire, The Sopranos, and Game Of Thrones for sure).