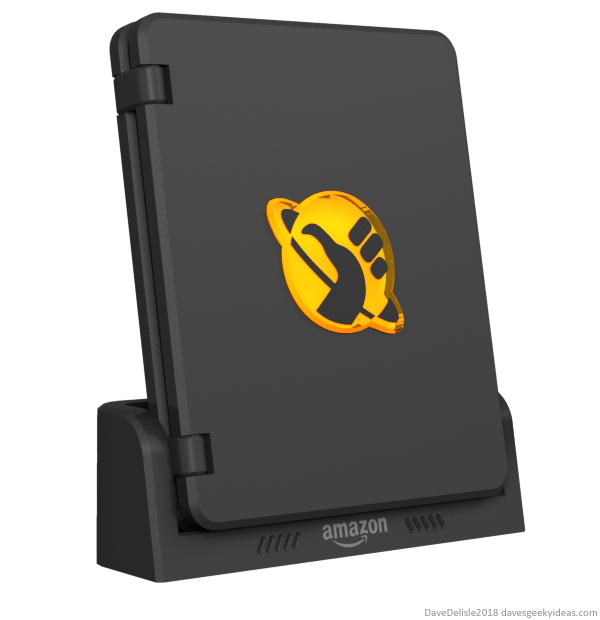 Amazon recently announced several new Alexa devices so I thought I would make one that is inspired by Hitchhiker’s Guide to the Galaxy, at least the one seen in the movie (which used voice commands for queries). I sort of got carried away and made 5 devices in one package, see below.

The cover features a translucent Hitchhikers logo, which illuminates when the LCD screen behind it is on, this is for the base Echo Dot mode. There is a DON’T PANIC on the back of the tablet, sorry I didn’t show it here.

The tablet can dock into the charging base (which has its own speaker) with the ‘book’ open or closed. For this design the book has to be raised to fold the cover behind it, but a flat base could allow for the opening/closing of the cover without undocking.

When the cover is closed for Echo Dot mode, the screen only needs to render a small white circle located behind the Hitchhiker’s logo, to save energy. This illumination design is active when you say “Alexa” to trigger the device in Echo Dot mode.

This started out as a tablet cover design, but I imagine that’s been done many times by now, probably for laptops as well.

Whether it’s a tablet or multi-device like the one here, it would be nice to query what a Vogon is, just like in the film. An app that works like Babel Fish would be a welcome addition too.