EverDrive Cartridges are game cartridges that feature an SD card slot for storing a large collection of game ROMs, essentially a multi-cart with a library you can edit. They are made for just about every cartridge-based console from yesteryear, from the NES to the N64. I think these products are great for allowing gamers to collect and play older games, despite the ROM piracy. Some games are tough to come by after a few decades.

I’d like to take the Everdrive a step further by including a screen and some play controls, transforming the cartridge into portable handheld console as well. It still plugs into a console for big screen gaming, but now you can take it on the road too. Sort of like a Nintendo Switch! 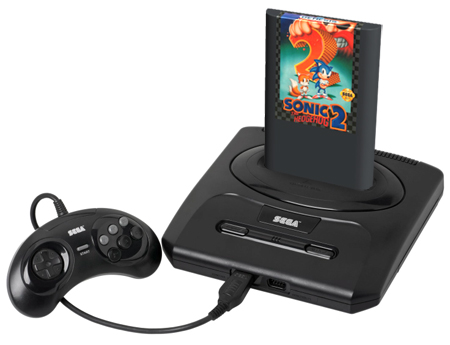 For this example I went with the Sega Genesis. The cartridge for that system is about the same width as the original Game Boy, so it just needed to be made taller to incorporate all the handheld stuff. The wider SNES cartridge would have a better layout, similar to the original Game Boy Advance, with controls flanking a centered screen.

With all the game saves being stored on the SD card, you could resume where you left off in both TV or handheld mode, much like a Nintendo Switch. I doubt this device could be charged by the console though, so it will need to be plugged-in via USB separately. Also I doubt you could grab the cartridge from the console and seamlessly continue your gaming session in mobile fashion, but that would be cool.

I added a ‘bulge’ to the front of this concept, so it will be easier to hold and play much like the original Game Boy; although I’m pretty sure this could be given a flat profile, given the slimness of smartphones and handhelds nowadays.